Although our mother-daughter relationship started thirty-four years ago, our professional relationship dates back eight years, when we began to conduct workshops for mothers and daughters. We are still not sure how the idea evolved, or whose idea is was, but we remember the excitement and anxiety we felt about the possibility of working together. Since that time, we have conducted over forty workshops in the New York metropolitan area, and have met literally hundreds of mothers and daughters who came together with the hope of healing or enhancing their relationships. Many of our workshops were conducted at the 92nd Street Y, and New York Open Center, and the Training Institute for Mental Health, as well as at other community centers. We have encountered mothers who have come with two or even three daughters, mothers who have come with their daughters and their adult granddaughters, as well as daughters who have come with their mothers and mothers-in-law to the same session.

The topic has captured the interest of television on WCBS TV for a documentary called “Father and Sons, Mothers and Daughters.” We have presented the topic on a cable TV talk show in 1994, and have had numerous requests to appear with mothers and daughters on television talk shows to discuss their issues and their progress after attending our workshops. We believe that the changing roles of women in society have helped increase and legitimize the interest in this primary relationship of mothers and daughters.

In this paper, we describe the format and content of workshops designed to bring mothers and their adult daughters together to explore, enrich, understand, and educate themselves about the complexity and special issues complicating this intimate and intense relationship. Our workshop is geared toward understanding the psychological, cultural, biological, and generational factors impacting upon the mother-daughter relationship.

Walters (1988) writes: “If mother is the cornerstone of family life, the mother daughter relationship is the brick and the mortar that holds them together.” It is a powerful, intense, personal experience involved in being a role model for caring, childbirth and intimacy (Notman, 1990). Each mother-daughter relationship is unique – with its own history, pain, joys and connections. Despite profound differences, similar themes continuously emerge. Even groups from vastly different cultural backgrounds, spiritual orientations, and ages bring strikingly similar issues to the surface. The shared experiences of mothers and daughters have the potential for the deepest mutuality and the most painful estrangement.

Many mothers and daughters come to the workshops wanting the other to understand the “core” of their relationship and with some expectation or wish that the other will change to accommodate this new understanding. Early in the workshops, daughters struggle with feelings of engulfment and strive to achieve a balance between closeness and distance. Some daughters feel guilty about their desire to separate because of their mothers’ “generosity and devotion.” There is pressure for daughters to feel that something is amiss if they feel attached to their mothers, since our culture places great value on independence, and generally devalues intimacy and attachment. Daughters run the danger of being labeled dependent and undifferentiated if they remain close to mother. Other daughters express resentment at their mothers’ distance and lack of involvement. Mothers feel guilty about their daughters’ struggles, while at the same time they feel resentful and anxious about being called to task for not having given enough. These mothers are caught between having had to accommodate their own mothers while at the same time having to accommodate their daughters. They ask “Where am I in all of this?” Mothers are still being blamed for their children’s ills – they are either idealized or demonized, and both lead to failure.

We frequently encounter mothers who have difficulty confronting their daughters, and daughters who experience their mothers’ struggle as deliberately withholding, which leads to an impasse in communication. Generally, mothers agree that their difficulty in confronting is related to not having had the opportunity to communicate with their own parents in this manner. Daughters growing up in the current social atmosphere have been encouraged to be assertive, and are impatient with their mothers’ silence or rush of tears. Some find it intolerable, and experience their mothers’ behavior as manipulative. Given the wide range of personal opportunities for young women today, it is difficult for them to comprehend or feel empathy for their mothers’ perceived lack of independence, feeling stuck in their marital relationships, or urge towards conformity. Daughters see mothers submissive to males and feel betrayed. “Mothers are blamed for the betrayal they themselves have suffered” (Debold, Wilson, & Malave, 1993, p. 55).

One surprising revelation to many mothers is that their suggestions, remarks, verbal and nonverbal communications have a critical impact upon their daughters. What feel “natural” and “casual” to the mother can feel very hurtful to her daughter. For example, daughter report that a remark such as “I see you’re letting your hair grow,” or “You decided to wear jeans today” (to the workshop), is experienced as a criticism, especially if mother’s hair is short, or if mother came dressed up. This is clearly a separation issue in which there is discomfort in being different.

For the most part, the issues of separation, individuation, and connection are the most salient themes for mothers and daughters. A mother’s desire to be “friends” with her daughter frequently conflicts with her daughter’s strivings towards autonomy. This often results in mothers feeling rejected and betrayed. Daughters heard that they cannot grow up until they cut the apron strings, but sometimes they cut off the person wearing the apron (Walters, 1988). For daughters, the questions arise, “How close can I be to my mother while maintaining my own perceptions, values, and interests?” “Will I accept my own point of view and perception I they differ from my mother’s?” This highlights the crucial issue of boundaries. Being directed to respect her daughter’s space can feel hurtful to a mother if she has not been able to carve out that space for herself. To the daughter, that space is vital to her well being and development, whether she is single, married, or a mother herself. For example, a mother “dropped in” which her two friends at her married daughter’s house on a Sunday morning since she “happened to be in the area,” and was eager to show off her daughter’s new house and see her granddaughter. Her daughter experienced the visit as intrusive and inappropriate, and the mother felt deeply hurt.

In general, the yearning to be free from pain and conflict and to feel understood, and be closer to one another in a meaningful, intimate relationship seems to be shared by all the women who attend.

These workshops are designed to last four to six hours, and participants’ ages have ranged from eighteen to eight-three. When we first started, a few adolescents attended the workshops with their mothers. Although some issues were similar, we found the struggles to be of an earlier developmental phase. This detracted the group from the process of working through the adult relationship of mothers and daughters. Consequently, the participants have been limited to adult daughters. The number of participants in each workshop has ranged from six to sixty, depending on registration. We find the optimal number of women in a group to be twenty to twenty-five, so we now try to limit the registration. To date, our work has been primarily with middle class, mostly educated women of various racial and ethnic backgrounds as well as sexual orientations. Quite frequently, participants are therapists who bring their mothers and/or daughters to “enlighten” them and share professional insights. Some women are referred by their therapists, while others are encouraged to come by former participants. Many come because the course description in the catalogue sounds interesting. When posed with the question of “Who brought whom to the workshop,” we find mothers and daughters frequently giving one another the course as a gift for a birthday or Mother’s Day. Mothers have traveled to New York City from as far as California, Kansas, and Florida in order to attend.

While most participants are open to introspection and exploration, we have had some women who have had severe emotional problems. For example, one young woman burst out crying hysterically during a session. When asked what happened she said it was too painful for her to see mothers and daughters sitting together and interacting. She had come with her cousin who took her home during the break. In another situation, a manic-depressive daughter had brought her elderly mother to work “publicly” on frustrating issues that she was unable to convey privately. Her mother, who sat with her hat and woolen coat on despite the warm spring day, was obviously unable to comprehend the daughter’s issues. As far as she was concerned, the relationship was “wonderful and needs to further discussion.” The group, with the leaders’ guidance, respected the mother’s position, thereby maintaining her integrity, while giving the daughter she was seeking. In this case, the daughter used the group to witness her mother’s defensiveness and to recognize her mother’s inability to comprehend her issues. The group enabled the daughter to confirm her reality and acknowledge her perception of the struggle, which helped to calm her. With the group as a witness, she could reconcile her experience without receiving her mother’s validation.

Workshops are greatly enhanced by the fact that the leaders are a mother-daughter team. The group watches us very closely! They can observe the interaction, mutual respect and negotiation required to make this workshop succeed. For most participants, this is the first time they are experiencing a mother and daughter facilitator team working together for the purpose of exploring this relationship, which makes the workshop more credible.

Our goal in these workshops is to facilitate the mother-daughter relationship by increasing the self awareness of both mothers and daughters, helping them articulate the issues keeping them apart, and educating them about the power of the relationship using psychodynamic and family systems theory. Because mothers and daughters have the opportunity to hear each others’ voices, which are echoed by other mothers and daughters, the group quickly becomes cohesive through identification with each others’ experiences. The sharing of these experiences frequently relieves feelings of shame and failure. Women nod in recognition, laugh, and cry upon hearing each other. 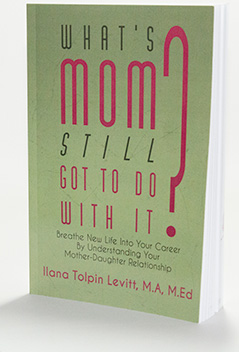 Never ask the way from someone who knows, because then you can never get lost.